With its 27 floors and height of 82 metres, Crown Prince is one of the most iconic buildings in Malmö and for a long time, it was one of the tallest residential buildings in Scandinavia. For this major renovation project, we collaborated with Fojab and NCC. The new facade is nearly identical to the original from the early 1960s, where 15,000 sq. m. has been covered with better insulation and new windows installed over the old ones. Approximately 2.5 million clinker tiles in five shades of blue have given Sweden’s fifth highest “skyscraper” a fresh new look!

During one of the inspections, it was noticed that the old facade was literally crumbling and a major renovation was necessary. Of the 30 or so tenders submitted to the property owner at the time (Akelius) and the main contractor (NCC), they ended up choosing Fasadglas.

“Our concept was specially designed and unique for this project. One of the first essential steps was to identify the right adhesive technique for the clinker tiles and make sure that they would not come loose. We consulted with adhesive expert, Thim Petersson and he was a great help. We also realized that getting all of the 1,600 facade pieces up was going to be a major challenge. Each one was around 10 sq. m. and weighed 500-700 kg. We needed to do this without requiring tenants to evacuate. The new facade elements were connected to the vertical frame because the joists weren’t strong enough,” explains Erik Stening, who worked together with Lars Bengtsson and Johan Kling to develop the concept. Jonatan Mårtensson and Johan Jönsson managed the project.

The new facade was hung on the outside of the old one. Fittings were attached to the vertical frame walls so that we could attach vertical rails along the facade that safely and securely were used to raise each facade piece from the ground to its designated position on the building, thereby eliminating the need to lift them hanging from a crane. The wind element was thus eliminated, making the whole process much more safe.

With this installation method and thanks to the careful planning of the client and contractor, there was minimal disruption for the building’s tenants while the renovation work was being done. The interior premises were also renovated in conjunction with replacing the facade.

Tested to withstand every type of weather

The new facade elements have a sandwich core and aluminium frame. The clinker tiles have been mounted on GRP Glass(fiber) Reinforced Plastic (GRP), which is a composite material that consists of a polymer matrix and glass fibres. The adhesive concept, based on polyurethane and epoxy, offered flexibility during transport and in changing weather conditions.

“The client had stipulated very strict requirements on adhesion of the clinker tiles. They simply must not come loose. To ensure that, we worked with SIKA to develop the right adhesive concept, which was tested by both RISE and the supplier. We also did continuous testing at our production facility in Hultsfred during the production period,” says Production Manager Johan Kling.

The facade was tested for weather and wind in accordance with EN 13830 at Reynaer’s facility in Belgium.

Designing the facade was certainly a challenge and another achievement worth mentioning is that not a single clinker tile needed to be cut at any point during the project. Each one is whole, even around the windows and at the corners.

A great solution for buildings from the Million Homes Programme

The experiences from the Crown Prince project open up new opportunities for similar projects at other buildings from the Million Homes Programme (an ambitious public housing programme implemented in Sweden between 1965 and 1974). The concept is appropriate for buildings of this era in need of renovation. Renovating, rather than demolishing, is a sustainable choice and way of honouring historically valuable works of architecture. 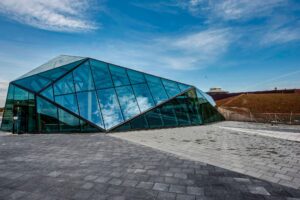 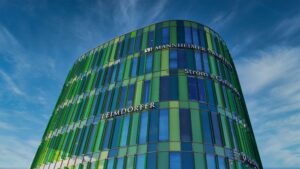